It’s spring break in Texas, and all along the coast, business owners and non profit executives 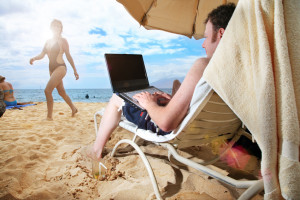 I became a business owner so I had the freedom to set my own hours: Here they are: 24/7

may have one eye on their kids playing in the surf and the other on their smartphones, checking their inboxes. You know it’s true. One of the most challenging things for people in charge to do is to learn to delegate. Make sure there’s somebody else who can handle things for a few days so you can go on vacation or have the flu or cope with a family event without spending the rehearsal dinner on the phone with your scheduling manager.

Delegating, frankly, is a skill set unto itself. It’s difficult for those of us who like to be in charge. After all, that’s why we’re in the positions we’re in. I have a friend who told me recently that she’s been working 80 hours a week. She’s had to cancel interviews she set up with people she might hire to help with the work load because she couldn’t stop long enough to meet with them. This is not sustainable.

Let’s face it, after the first 50 or 60 hours, you’re probably not getting that much work done. Whereas if you took that extra 10 or 20 hours and hired someone and started to train them, they could be handling 40 hours and you could, you know, breathe. Or if you have employees and you spend 30 minutes with them in the morning making sure everybody’s ready for the day, you can leave those tasks to them rather than hovering like one of those parents the media’s always complaining about these days.

You’d probably do better work, too. Really, when you’re working that much, it’s like pedaling your bike in first gear. If you hand over some of the responsibility to someone you trust, it’s like moving into second gear. And each revolution of the pedal takes you farther in second gear. If you want to grow, you have to learn to delegate.

So it’s about learning to let go. And you have to begin with baby steps. For me, once I started hiring associates, I began by taking a long weekend and not checking my email on Friday or Monday. Gradually I was able to take a week, and then two. I was initially inspired by a business owner I met in Europe years ago who traveled with his family because he had an import/export business. He was able to be gone so much, he said, because he had great employees who he totally trusted. That was long before I had my own company but I have never forgotten it.
As long as you ARE the business, the business is limited. So hire people who seem competent, emotionally mature and trustworthy and then trust them. Delegate increasingly important tasks to them and be around to catch them, at first, if something goes awry. Then let them go.

And watch your kid in the surf. If you want to worry about something, look out for Man-O-Wars.