Why May Be the Best Management Tool You Have

Toyota has the five Whys. Other organizations have seven or three. The point of the 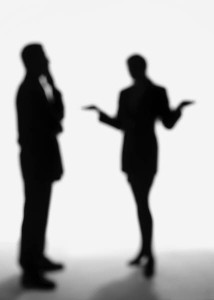 As the body language suggests, the Whys have begun, but we’re some distance from an actual root cause……

whys, however many you use, is to understand the root cause of a thing. For example:
We’re not going to make our numbers this quarter.
Why?
Because we’ve been down two sales people for the last two months.
Why?
Because they both quit abruptly and we haven’t been able to replace them.
Why?
Because we weren’t prepared to hire new people and had to start from scratch.
Why?
Because we don’t have a pipeline set up for hiring new people.
Why?
Because we thought it was an unnecessary expense of time and energy…until now.

The point is, there’s a lot of information to be gleaned by asking the question why. You can usually get to the root of a problem and you can certainly learn a lot from the person answering the why questions. I was involved in a situation once where an employee kept coming in late. They called her in and asked Why? She plainly said that she’d been going out a lot with friends lately and simply wasn’t making work a priority in her life. Bingo. So the manager asked her how she thought she would avoid being late in the future and she rather flippantly replied: “I don’t know, maybe I’ll buy a better alarm clock.”

When she left the manager looked at me and said: “She’s going to be late again, isn’t she?”
“Yep,” I replied.
“I’m going to have to fire her aren’t I?”
“Probably,” I answered. As it turned out, a few days later, the employee just no-showed and that was that. At least they had a resolution, just from the simple act of asking Why? Up to then, the manager had been making excuses for her, hypothesizing and guessing at a justification or rationalization. It got so bad, they finally had to deal with it. But if they had asked her earlier they would have seen much earlier that her attitude was cavalier and disinterested and there wasn’t much point in investing in a solution.

Why can also help you see if you have someone who is going to take responsibility for his or her actions or point fingers and lay blame. Sometimes it is the other guy’s fault. Clients don’t get back to you with feedback in time to finish the project by deadline. Or a key team member is out with the flu. But if a person’s habitual answer to the question Why? is to blame someone else, that tells you you’re dealing with an irresponsible employee who can’t take ownership of a project or his or her own mistakes. Nobody grows from that place.

Why? shows other things as well. If you ask someone Why? he left a company and he says he had a new manager and he didn’t like the manager, you ask Why? again and you learn a lot about what kind of people this candidate likes to work with and doesn’t and how he sees his role.

Sometimes, people feel funny asking Why? It feels rude not to accept the surface answer someone gives you. Clearly, they’ve revealed all they’re comfortable revealing. So you have to build this kind of inquiry into your culture—candidate interviews and interrogation of projects and processes–so that people know not only that they are going to have to be able to answer these for others, but they begin to ask them of themselves. That’s a great way to wind up with a workforce that takes responsibility for, and really thinks through its actions.