The Employment Honeymoon’s Over. But That Can Be Good.

In honor of Valentine’s Day, we always pay homage to the fact that—in a lot of ways—an employment 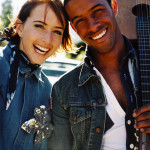 In the days before she asked if he could please leave his guitar at home just once and he finally demanded “What’s the deal with that flower pin?”

relationship is like a romantic relationship. Recruiting is like dating. The first 90 days are like the first few glorious months of the relationship. And then comes the settling-in period. The employment honeymoon is over.

In employment terms, when people first get hired, their big priority is to fit in. But once they’ve found their place, they know where they fall in the hierarchy and have their lunch buddies picked out, they start bringing their true selves to work. And they start to have their own agendas. Up to now, the employee was so hyper vigilant about not screwing up that he never did. She never argued with anyone in staff meetings. He never expressed having a problem with any of the employees he manages. But now, it all starts to come out.

Meanwhile, you’re probably relaxing too. You might have known about the dysfunctional parts of your company, but everyone kind of kept them on the down-low and was on their best behavior at first. Now it’s like: “Meh, he might as well know,” and the office politics start peeking out again.

In a lot of ways, this doesn’t feel like a good thing. Now you have to actually manage the employee. He might have an issue with lateness or hygiene you have to confront. Or, it turns out that when you two communicated before, it always seemed effortless, but that was because he was keeping his mouth shut. Now he’s telling you he doesn’t get it, or he doesn’t agree. Issues between him and another employee may arise.

The thing is, these could be deal breakers—like finding out your new beau really admires Joseph Stalin—or they could just be the normal adjustments we all go through and should expect in new relationships. If the employee just isn’t productive or engaged, that might say something about the employee or it might confirm something about the organization that you already kind of knew needed to be addressed. If she begins to argue with the way things are done, it might be you were following a dated model and she’s got some fresh insight that’s more in keeping with the way your industry operates now. If she’d kept quiet like she did at first, while she was figuring things out, you would never deal with this and your business could suffer.

Of course, it could just be you had the wool pulled over your eyes and this employee may not work out. In any event, this is the way relationships go—both love and work. New people bring new perspectives and new behaviors that, one hopes, force us to constantly evaluate ourselves, our own performance, perspectives and behaviors. That inspires growth and wards off stagnation, even though it can be really uncomfortable. But if you can communicate, work through it, and accept responsibility for your own growth, it can turn out to be a beautiful partnership where you operate seamlessly and supportively and produce something far greater than either of you could have produced alone.

So on this Valentine’s Day, remember that even if you’re still in those very early days where you pop a breath mint every 15 minutes, eventually this person will show some stuff you’re not going to be that thrilled about. Chances are, they’re going to have the same experience about you. That doesn’t mean things are going wrong, it means they’re going normal. And the time after the honeymoon could turn out way, way better even than the first kiss.