So, recently a client was complaining to me about his Millennial generation employee who was 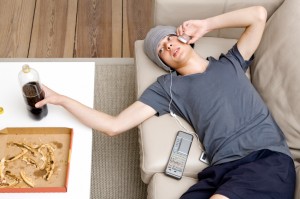 Okay, be fair. Does your Millenial employee really look like this?

completely pumped about taking Friday off to spend three days at ACL. It just bugged the employer that this generation didn’t get it.

“He’s just a lot more excited about ACL than he is about his job.”

So I asked: “Does the employee get his work done? Is it done well? ”

“Yeah,” the employer admitted. “But he just doesn’t seem committed.”

Fortunately, I host the ATXBizOwners Meetup with Marc Miller of Career Pivot. Marc had just done a great session for us about how the five generations impact the workplace and I was ready for this conversation.

Here’s the thing. This employer is in his 50s. He’s at the tail end of the Boomers, the generation that still knew the joke about getting a gold watch after working someplace for 30 years. His parents, and his grandparents, were shaped by Pearl Harbor, World War II, the Great Depression, Korea, the 1960s. There was a growing freedom, but most people were expected to plug into a big company and never leave. A lot of Millennials watched their parents stay in a job come hell or high water, retiring after counting down the days in those final years of agony. Or they saw their parents lose their jobs just shy of retirement. Heck, I remember my dad taking 1-to-3 weeks of vacation every year and, now that he’s retired, admitting to me he wishes he’d spent more of his early years enjoying himself. For the Boomers, devotion to the workplace was a virtue, rewarded by seniority and pensions and 401Ks. In fact, in companies with really fantastic retirement plans, they were often referred to as “golden handcuffs.”

Now the pensions are gone and the 401Ks are withered. And tomorrow, somebody might invent a new technology or development language that makes your skill set obsolete. So can we blame Millennials for operating out of a whole different framework? They don’t think in terms of devotion to one workplace. They’re in the free agent zone. They might commit to a company if the company has a cause they’re already passionate about, think TOMS or Zappos. Otherwise, they’re just passing through. They’re willing to work hard and know how to work effectively. But it isn’t their life.

Millennials were children when 911 happened and the U.S. was once again attacked on its own soil. Only this time, it wasn’t 1941.  We saw it happen live on TV and internet. That, too, gives Millennials a certain sense that they should really grab life by the ACL tickets and enjoy, because you don’t know what could happen tomorrow.

By the same token, some young people do have a tendency to think “Move over grandpa, this is the way we do it now.” It’s that charming cockiness that comes before life has knocked you around a little and gravity has taken its toll on your body. The fact is, there are a lot of Boomers and they know stuff and they’re going to be around awhile. So it’s important for Millennials to understand that—whether it’s your boss or your customer—he’s got a good reason for his perspective, too. You need to understand where he’s coming from.

Now there are lazy Millennials, just as there are really amazing, productive Millennials and just as there are lazy Boomers. But a lot of what people may attribute to the deficiencies of a generation are often just a lack of understanding of the influences and events that shaped that generation’s value system. As with any relationship, if you can understand why a person thinks and functions the way he does, rather than just judging from your own experiences and framework, you can make a much more successful, fulfilling interaction. And you might just learn some stuff, too.

We love helping the generations understand each other. Call us.