On Trust and Chickens

Last week I heard a TED talk by Margaret Heffernan about productivity and chickens. 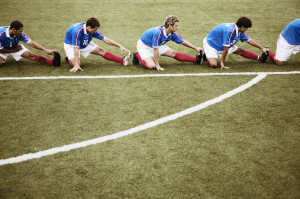 You don’t want these guys competing to be THE star.

In a study mentioned in the talk, a researcher cultivated several generations of chickens, eventually culling the most productive into one coop and leaving the others in a different coop. After the separation, the less productive chickens thrived and their egg laying increased. As for the other chickens, rather than laying as they had or perhaps increasing production, they pecked each other to death. Their high productivity had depended on repressing the productivity of the others. When she began discussing this with individuals, Heffernan said, people would say: “That’s my company…” or “That’s my life.”

A lot of companies have tried to increase productivity, revenues and growth by boosting performance through employee ranking. They figure the employees, in competing with one another, will strive to perform better and better and drive the company’s future up with it. That’s what the chicken guy thought. I call it Hunger Games Management.

Get everybody crawling over each other and trying to pull the other guy down and you’ll have a bunch of tough warriors who will gnaw their own arms off rather than lose. In reality, though, most research shows that in that kind of highly competitive environment, productivity actually tends to decrease. I mean think about it, if you’re number five on the employee leaderboard, you might just give up and play Minecraft.

Plus, frequently the competition is for a promotion or a project that the manager assumes all the employees will want. So the manager has them virtually kill one another over the possibility of being named manager. But the fact is, not everybody wants to be a manager. Some people like the work they’re doing and don’t want to spend a lot of time overseeing others doing the work they’d rather be doing themselves. They don’t lack ambition, they just have a different ambition. And that’s got to be okay. Because a team requires a number of different people with unique perspectives and strengths. If everybody wants to be manager, they’ll peck each other to death. If some are content to be where they are or have other desires, the team is more likely to find harmony.

As Heffernan pointed out, over a vast array of research, the most successful teams are not those with the fiercest competition, or the highest collective IQ, or the ones with the rock star performers. The best performing teams are actually the ones with the most empathy and collaboration. People who care about and trust each other perform best. And what is required to create empathy and trust? Time. People need to spend time together through projects and personal interactions where they’re depending on each other. You trust someone when you’ve known them over time and you know they’ll come through, they’ll pull their weight, they’ll have your back, they won’t throw you under the bus and other figures of speech that imply trust.

Trust takes time and trust creates top performance. Conversely, competition among employees destroys trust, creates churn-and-burn turnover that means no one gets to assess one another over time and ultimately wrecks performance.

The best performing teams are those where everyone is rooting for each other’s success and pulling together for the success of the organization. Really. For people and chickens.

One Response to “On Trust and Chickens”