Navigating the Murky Waters of Social Media and the Workplace 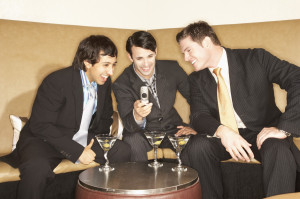 This will seem so much less funny tomorrow.

Recently I was quoted in a Texas Tribune article entitled “Legislating Goes Social….” about the tricky business of building fair legislation around private use of social media in the workplace. At ValentineHR, we’ve been wrestling with this one for awhile now. Should managers fire employees for dissing the company on Facebook or blasting a manager on Twitter? Do employers ever have the right to ask for access to an employee’s personal social media accounts?

It’s a new area of law that nobody has a firm handle on yet. Recently the National Labor Relations Board voted to reinstate case workers at a New York State nonprofit who had gotten into an argument on Facebook. One employee wrote that she was thinking of reporting others for not doing their jobs well. Four other employees fired back that they were working more than full time. Some of their comments were heated. The nonprofit fired the angry respondents because they violated company policy by harassing the would-be whistle blower. But the NLRB voted that the discussion the angry employees had had was “concerted activity” for “mutual aid”—similar to talking about forming a union—which is protected under the NLRB. And the employees got their jobs back. In two other cases, however, in which employees were complaining online and advocating violence—however tongue-in-cheek– the agency upheld the terminations.

So there you go.

In essence, an employee complaining about his company on Facebook is the modern equivalent of him griping one night at a bar or around the water cooler. Except that whatever you say on social media doesn’t go to three people—it can go to hundreds. And those hundreds of people can share it with hundreds more. So it’s more like standing up in a crowded bar and screaming that you think your boss is a jerk and hoping it doesn’t get back to him. Plus, it’s virtually permanent. And when you cool off or sober up, there it is.

As I told the Tribune, I worry about blanket social media policies that prohibit employees from ever saying negative things about their company or their coworkers because it smacks of overriding the First Amendment. Employees have a right to private lives and private thoughts. It is a rare occasion when an employer has any justification for asking—as some do—for access to employee’s social media accounts. Frequently employers investigate candidates Twitter feeds to determine whether they should employ them. Some courts have ruled that social media should have the same levels of privacy as a phone conversation or a private chat at the water cooler.

On the other hand with the far reach of social media, a disgruntled employee could seriously damage a company’s reputation. Companies need some means to respond if an employee is sharing proprietary information, accusing the company of something like fraud or shredding individuals in a public way.

Companies need to have clear and specific social media policies that protect both the employee and the company and have new employees sign off on them as a condition of employment. If it is the company’s policy to prohibit the dissemination of proprietary information, customer information and inner-office communiqués, that’s what employees agree not to do when they sign a proprietary information contract. If they violate that on Facebook, they can be fired for breaking a company policy, not for speaking their minds. If, on the other hand, the employee is exposed as complaining that his boss undermines him at meetings and makes him look stupid, that could be an opportunity for a constructive conversation about that relationship.

In fact, one of the best strategies for avoiding embarrassment on social media is to create a company culture that invites employees to air their grievances without fear of reprisal. If they can talk to their supervisors about the problem, maybe they won’t feel the need to spread it all over Facebook.

Your social media strategy is going to be important not only to your revenues but to the Department of Labor for years to come. We can help you choose policies that keep you within the boundaries of fair labor laws. We work with companies on a project basis or on retainer, providing a custom level of HR help designed for your business. Contact me at Caroline@valentinehr.com or call (512) 420-8267.